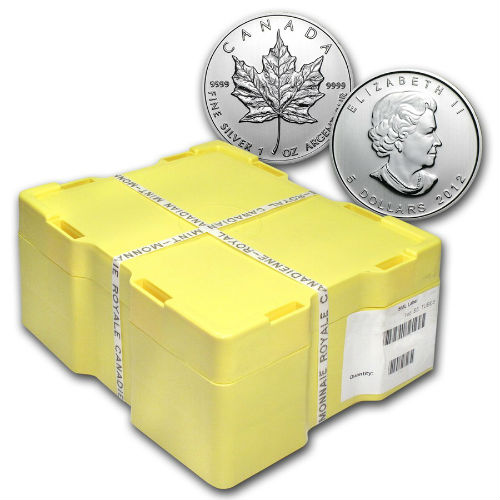 Each box contains 20 tubes of 25 coins, issued directly from the Royal Canadian MInt.

The Canadian Maple Leaf features an image of a Maple Leaf on one side, with Queen Elizabeth II on the other. Each coin has a face value of $5 CAD. These coins are 9999 fine, the highest purity available in silver coins currently.

The Maple Leaf series is one of the most popular precious metals series available to investors on the market - the coins are currently available in gold, silver, platinum and palladium, and the Royal Canadian Mint has also introduced a gold and silver bar with a Maple Leaf image on them.

The Royal Canadian Mint produced the innovative Canadian 1 Ounce Silver Maple Leaf coins in 1988 after successfully selling the Canadian Gold Maple Leaf that was minted for the first time in 1979. The coin is produced annually and is made of .9999 fine silver, which makes it one of the most popular bullion coins in the world.

Before the foundation of the Royal Canadian Mint, all coins circulating in Canada were minted by the Royal Mint in London. The Canadian mint produced its first coins in 1908 in Ottawa under the leadership of governor General Lord Earl Gray. The Canadian Silver Maple Leaf coin has undergone changes is design but the general elements of the silver coin have remained the same.

The Silver Maple Leaf coin produced from 2017 onwards comes with a new security feature called the Royal Canadian Mint Bullion DNA program. This technology offers one of the best forms of security for precious metals. The new security feature consists of a textured maple leaf that is micro-engraved onto the coin using laser technology. This image can only be seen under magnification. The micro-engraving is scanned and recorded for future reference and this means each maple leaf coin has its own unique bullion DNA.

The 1-ounce Silver Maple Leaf Monster Box contains legal tender coins and is a popular option among investors looking forward to diversifying their investments with bullion to protect themselves from the recessions common in the securities markets.