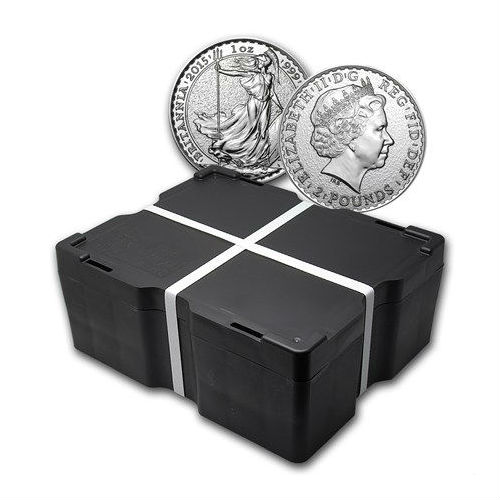 The British Britannia coin series is one of the most popular issued by the Royal Mint, and is available in gold and in silver. The silver Britannia features an image of Lady Britannia, walking with a trident in one hand and a shield in the other.

The monster box contains 500 pieces of 1 Oz silver coins in brand new uncirculated condition. This translates to 15.56 kilograms of fine silver. The random year silver Britannia coins have a face value of £2, which makes them the largest and purest coins. The coins are a legal tender in the UK and are exempted from the capital gains tax. This has made them the most preferred by British investors interested buying bullion in large share. The coins have continued to bear the legendary image of Britannia, the national symbol of Great Britain.

The weight and the purity level of the coins are assured by the U.S government. The coins are designed and packed in a way that enable mass storage and safe transit. This provides exceptional convenience for investors and collectors. Purchases of 25 coins are shipped in Royal Mint tubes. Large orders of 500 coins come in sealed Royal Mint Monster boxes. This option is favorable for investors interested in buying silver in large quantities and selling later.

Britannia coins are highly sorted after because of the silver content, which makes the coins highly liquid. This makes it easy for investors to liquidate the coins when the prices are high. The current Britannia coin series have unlimited mintage. Investors interested in limited edition coins can opt for the Queen Beasts or the UK lunar coins.