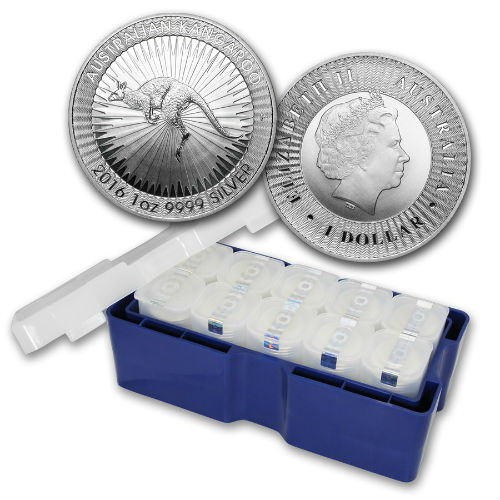 Silver Kangaroos are sold in 10 tubes of 25 pieces, and come in their original packaging provided by the Perth Mint.

The silver Kangaroo coin was recently introduced into the precious metals market due to the popularity of the gold Kangaroo coin. The Perth Mint also produce the silver Koala and Kookaburra coin.

The Perth Mint first introduced the silver kangaroo coin in 1993, and they were later introduced again in 2016. Limited numbers of coins are produced annually. The Monster Box contains 250 silver coins each weighing 1 oz and made of .9999 fine silver. The Kangaroo Monster Box has proven a popular choice among investors across the globe from the time the coins were released in larger quantities in 2016.

The Features of The Monster Box - Silver Australian Kangaroos

The tubes are sealed by the Perth Mint and bear a holographic security strip fitted on top to enable customers to tell whether the Monster Box has been tampered with. The Kangaroo is the most recognizable symbol from Australia's wildlife. The red Kangaroo engraved on the silver coin can run at speeds of 35 miles per hour. In fact, the massive steps the kangaroos take propel them 25 feet in one leap.

Buying the Silver Australian Kangaroo Monster Box benefits investors in a number of ways, which include: