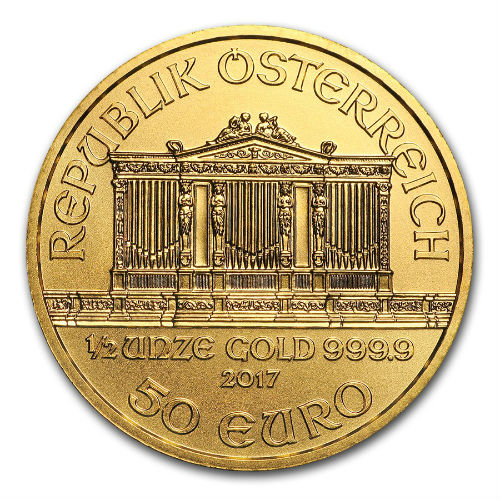 Each coin features the image of the Great Oragn of the Golden Hall in Vienna's Musikverein on the front, with an array of instruments on the back.

The front of the coin depicts the weight, fineness, year and face value of the Philharonic gold coin. Each coin has a face value of 50 Euros, and consists of 9999 fine investment grade gold bullion.

The Austrian Philharmonic gold coins were the bestselling gold coin globally in 1992, 1995, and 1996 based on the statistics published by the World Gold Council. The design of the Gold Philharmonic coin was inspired by the famous Vienna Philharmonic Orchestra. This is one of the most famous orchestras in the world. The front of the coin bears the image of the Great Organ of the Golden Concert Hall in Vienna.

The Features of the 1/2 Ounce Gold Philharmonics

The change in the law in November 1998 permitted the production of pure gold coins for investment purposes. Nevertheless, the design of the coin had to reflect the Austrian culture. Designers brainstorm several ideas before settling for musical instruments. The theme of music was chosen because it is a harmonious ambassador with a language understood worldwide.

The Vienna Philharmonic Orchestra is a symbol of music worldwide and a reflection of Austrian culture. The Gold Philharmonic coins are in brilliant uncirculated condition meaning that they don’t show signs of wear and tear.

The Gold Philharmonic was designed by the Chief Austrian engraver Thomas Pesendorfer. He chooses to include eight orchestral instruments. The instruments include four violins, a Viennese horn, a harp, and a bassoon. The backside features the famous Pipe Organ from the Goldener Saal of the Viennese concert. Theophil von Hansen designed the case organ and the entire concert hall building.

Friedrich Ladegast designed the original organ in 1872 and from then the organ has undergone modifications, with the last one done in 2011. The Gold Philharmonic coin is considered legal tender in Austria. This contributes to the popularity of the gold coin in the international bullion market.