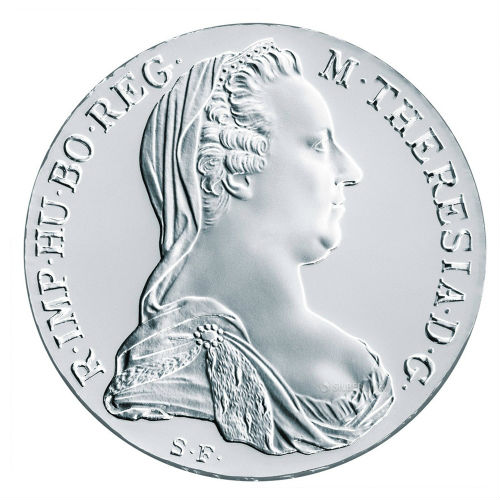 32.22 USD
Out of Stock
Description

The 1 Ounce Austrian Maria Theresa silver Thaler coin is a newly released restrike of the original coin, which was released in 1780.

The front of the coin features an image of Maria Theresa, who ruled the Austro-Hungarian Empire from 1740 until 1780. During this period, the silver Thaler was the currency used, and was well known and used across Europe, and it was the basis used by the United States when they adoped the silver Dollar under the Mint Act of 1792. The word 'dollar' comes from the Austrian word 'Thaler.

The coin is produced by the Austrian Mint. Each coin has a face value of 1 Thaler.

The Austrian Mint also produce the Austo-Hungarian Ducat, and the Philharmonic series of silver coins.

The silver Austrian Thaler coin is available for VAT-free Swiss storage or for delivery.