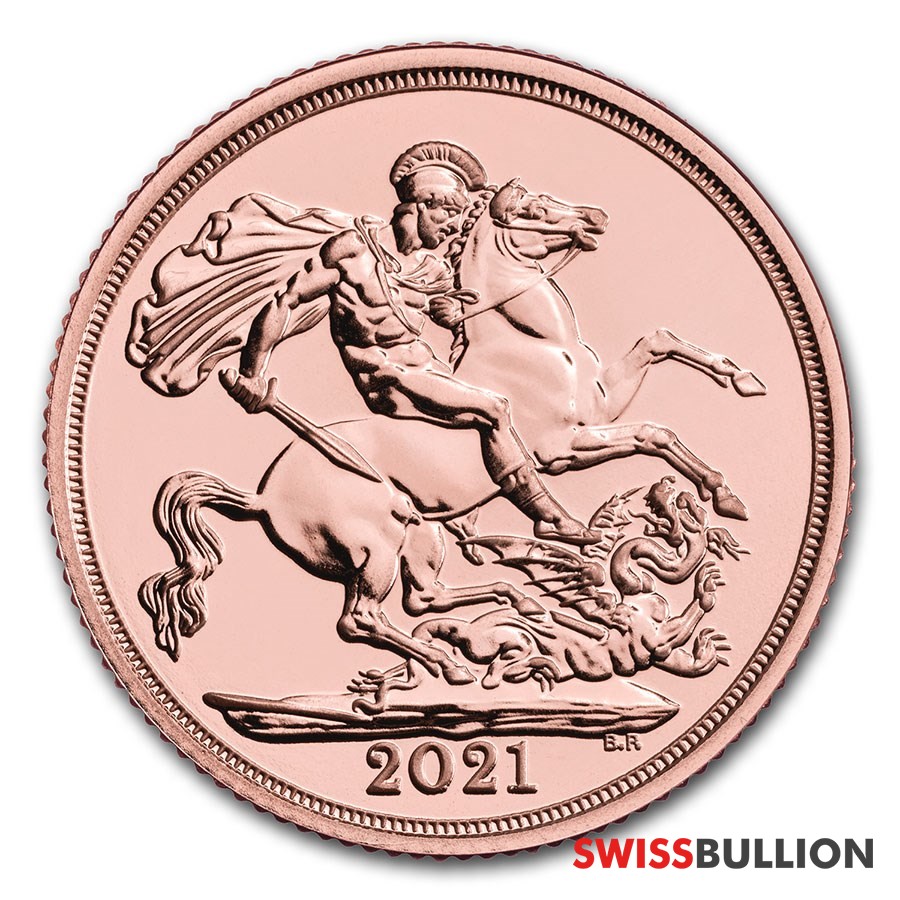 These coins are brand new and in uncirculated condition.

Each coin features an image of King George slaying a dragon on one side and a portrait of Queen Elizabeth II on the reverse.

The British Sovereign is produced by the Royal Mint in the UK, and the current model has been in circulation since 1980.

The British Sovereign is a particularly popular gold investment option for UK Citizens, as not capital gains tax is payable on any profits earned on the coins.

The 2021 gold sovereign coin is a product of the Royal Mint and one of its leading projects. The sovereign coins were minted for the first time in 1817 during the Napoleonic wars. Since then, the sovereign has garnered a reputation as the most prominent coin in the world. The coin value is determined by the Royal Mint and weighs 7.98805 in grams. The front of the coin bears the fifth portrait of HM Queen Elizabeth II. The back of the coin bears the iconic George and the Dragon design as done by Benedetto Pistrucci.

The face value of the sovereign coin is altered every year. The older version comes with a premium price. The release of the 2021 gold sovereign coin coincides with the 200th anniversary since the first modern double and five-sovereign coins were minted.

The Features of the 2021 Gold Sovereign Coin

The gold sovereign coin was originally a legal tender in the UK before becoming a bullion coin. The sovereign coin is named after the English gold sovereign that was produced for the fast time in 1603. The coin was part of the Great Recoinage done in 1816. Upon release, the coin was unpopular because people preferred banknotes. The coin became popular when the law limited the production of paper currency.

Currently, the 2021 gold sovereign coin is primarily considered a bullion coin in the UK, although it’s still has legal tender value. Orders of 25 coins are packed in tubes while large order of 500 coins come in monster boxes.

Royal Mint gold Sovereigns bear the new portrait of The Queen from 2016. British Gold Half Sovereign
245.97 USD
In Stock
Add to Cart