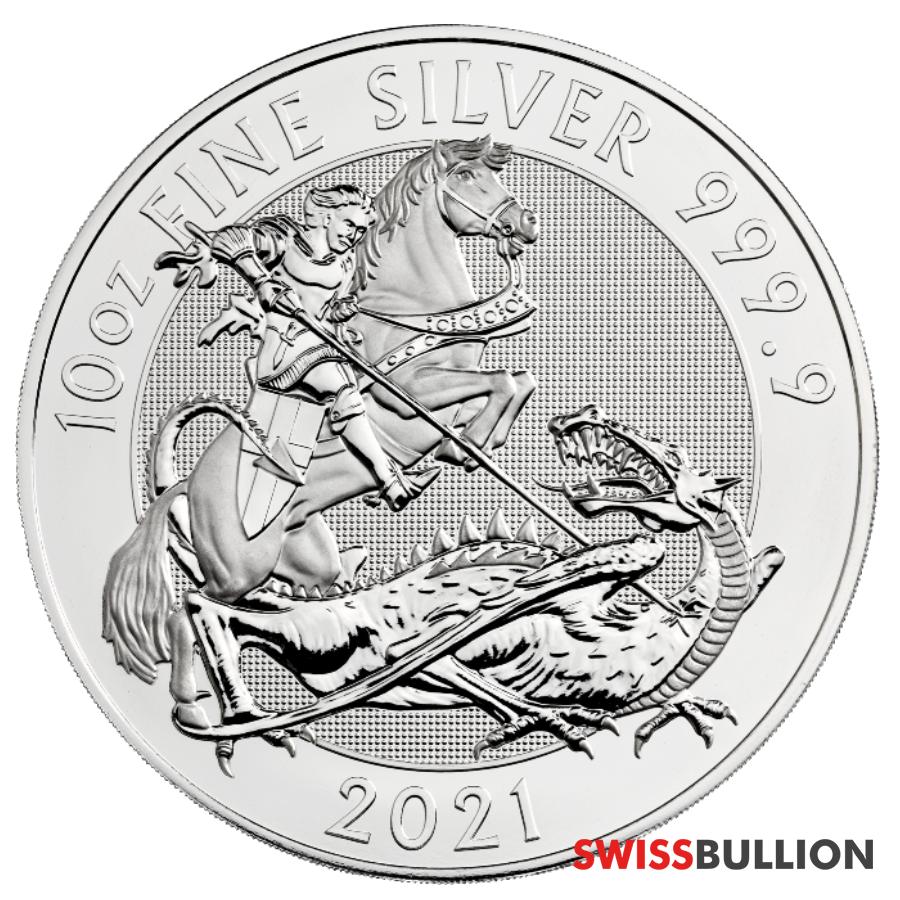 Each coin features Queen Elizabeth II on the front, with the coin's face value of 10 GBP.

The 10 oz silver valiant coin is a product of the British Royal Mint. The design of the coin captures the fairytale of St. George and the evil dragon. In the legend, St. George saved a princess who was about to sacrifice herself to a ferocious dragon. This makes the silver valiant coin an aesthetically appealing bullion coin to both investors and collectors.

The back of the coin bears the classic image of Saint George slaying the dragon while riding on his horse. The dazzling design inscribed on the Valiant coin is the product of collaboration between two accomplished artists; Etienne Millner and Emma Noble. The design of the coin is also meant to depict a similar image to that of the gold Sovereign coin, one of the Royal Mint's most successful gold coins, which has been released for more than 200 years.

The Features of the 10 Oz Silver Valiant Coin

The 10 oz silver Valiant coin is attractively priced and recognized as a legal tender in the UK. This makes the coin to be exempted from the capital gains tax. This means that investors purchasing the coins are eligible for CGT exemption. Investors don’t have to pay tax on the profits they make.

The weight and purity of the coins are guaranteed by the UK government. These coins are designed to be stored in mass and transported safely. This provides convenience at another level for investors.

The image of St. George depicted on the coin shows him riding on a horse. He leans forward to drive his spear deep into the neck of the dragon. St. George is wearing full armour and shielded with the cross of St. Andrew.

The effigy of Queen Elizabeth II on the front of coin was designed by Jody Clark in 2015. This was during the launch of the fifth-generation coins that bore the image of Her Majesty. In this design, Queen Elizabeth is depicted wearing the George IV State Diadem Crown with a guilloche effect on the background.

These coins are available for VAT-exempt storage in Switzerland and for delivery worldwide.