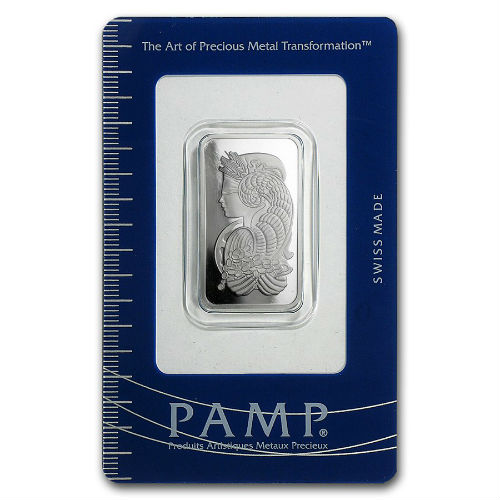 These bars are part of the PAMP Fortuna series, the most popular design produced by PAMP.

The front of the bar features an image of Lady Fortuna on it. The image of Lady Fortuna is supposed to bring both luck and wealth to those who cross her path. PAMP was the first precious metals refinery to depict an artistic image on one of their bars. The reverse of the bar features the PAMP logo, with the weight, fineness and serial number of the bar. All Pamp palladium bars contain 999.5 fine palladium.

The PAMP Fortuna series of bars is available in gold, silver, platinum, palladium and rhodium.

PAMP Fortuna palladium bars are available to individuals looking to invest in palladium in 10 gram, 1 ounce, and 10 ounce sizes. The 10 gram PAMP palladium bar is the perfect choice for those looking to place smaller amounts of money into palladium.

All PAMP 10 gram Palladium bars come individually sealed in a certicard, which protects the bar and guarantees the authenticity of the bar.

Adding Palladium to a Portfolio

Palladium has only recently gained popularity as a mainstream precious metal for investors. However, its recent ascent in value has gained a lot of notice. Within the last five years the metal has doubled in value. Palladium's price does not necessarily follow the prices of gold and silver. It is a much rarer metal, and almost all palladium comes from South Africa and Russia. This means that it's price is much more dependent on the economies of those countries than gold or silver, which are mined in many different countries. Furthermore, palladium is used in the automotive industry, which can also affect its value. Therefore, individuals building a diversified portfolio including precious metals should include palladium in their portfolio along with gold and silver.

Pamp is one of the most recognised precious metals refineries worldwide. PAMP bars are recognised by and approved by the COMEX, the LBMA, the LPPM and the SNB. This means that they are made to the highest standards that exist in the market. PAMP is one of Switzerland's most prominent precious metals refineries, and they offer a range of very well known products, the most popular being their Fortuna series of bars.

PAMP palladium bars are available to individuals investing in palladium for delivery or for VAT-free Swiss storage. Clients wishing to avoid paying VAT on their purchase may select to store their purchase in Zurich, Switzerland instead. Clients with bullion in storage may select to sell their palladium or take delivery of it at any time. For clients who choose to sell their bullion back, no VAT is ever payable. Clients may buy bullion in a range of currencies including Euros, Pounds and Swiss Francs.