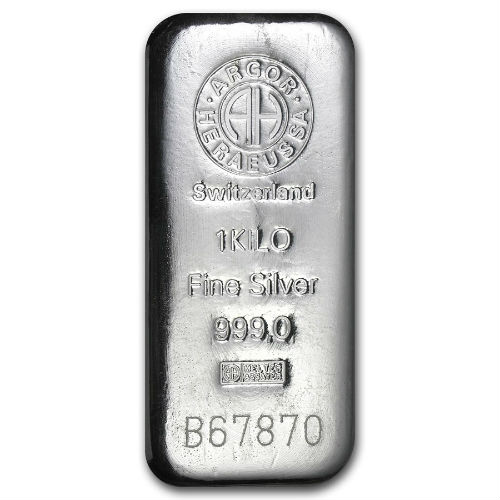 These bars are available for VAT-free Swiss storage.

These bars feature the Argor Heraeus logo at the top, with the weight, fineness and serial number located beneath.

The edge and the back of the bar are in roughcast. The bars come in protective plastic capsules. Buying cast silver is beneficial to investors because they pay lower premiums.

Argor-Heraeus SA is one of the biggest gold refiners on earth and a manufacturer of bullion bars. The company is headquartered in Mendrisio located about 17 km from Lugano in South-Eastern Switzerland. The minting of bullion coins and bars takes place in Mendrisio. The company is privately owned by Heraeus Holding GmbH, Commerzbank International SA, the Austrian Mint, and Argor-Heraeus management.

The big precious metal refinery located in Mendrisio was established in 1988. In the same year, the mint was expanded. In 2004, the company opened its first office in Latin America in Santiago de Chile. The Representative Office is co-owned by Argor-Heraeus Deutschland. After field surveys that lasted for a decade, the company started a joint venture together with Aljbatech (Russia).

The joint venture focused on hard coating and DLC. In 2006, Argor-Heraeus started its second affiliate company in Italy under the name Argor-Heraeus Italia. In 2012, a new ancillary mint was opened to double the company’s production capacity. Within the same year, the company installed solar panels and an electricity production system as part of its commitment to sustainability. Apart from gold, the company refines silver, platinum, and palladium, and produces bars and other products.

Argor Heraeus uses wet chemical processing and electrolysis as the main gold refining methods. The company has an annual gold refining capacity of about 400 tons. The company produces a standard category of 9 cast bars, 11 minted bars, and 8 minted kinebars. The 1-kilogram Argor-Heraeus silver bar falls under the category of cast bars. Each bar comes packed in individual plastic packaging.