A History of the Silver Philharmonic

The coins were released in response to the increasingly popular demand for gold Philharmonic coins. The Austrian MInt is the only European MInt (other than the Royal Mint in the United Kingdom) to release precious metals coins annually for retail investment.

The first year of their release, a million coins were officially struck in anticipation of strong demand. However, the Austrian MInt had sold over 8 million silver philharmonics by the end of 2008.

The Austrian Mint saw the greatest demand for the silver philharmonic in 2011, when a total of seventeen million eight hundred and seventy three thousand seven hundred (17,873,700) coins were struck.

About the Silver Philharmonic

The original design of the coin was created by Thomas Pesendorfer to be used when the gold commemorative coin was released back in 1989.

The design of the silver Philharmonic coin is similar to that of the gold Philharmonic coin. These coins feature a fantastically struck image of the famous Pipe organ showed inside the  Vienna Musikverein Gold Hall on obverse side. The face value of 1.50 Euros is clearly marked along with the year the coin was minted and the words “REPUBLIK OSTERREICH” (translates to Republic of Austria) arched over the Gold Hall itself. Beneath the pipe organ are the words “1 UNZE FEINSILBER” (translates to 1 ounce pure silver)

The reverse side of these coins features musical instruments from the Austrian Philharmonic Orchestra such as the harp, violin, flute, cello, bassoon and the french horn. The words “WIENER PHILHARMONIKER” (translates to Vienna Philharmonic)  arched around the instruments and in smaller printer just below that is “SILBER” (which translates to Silver). 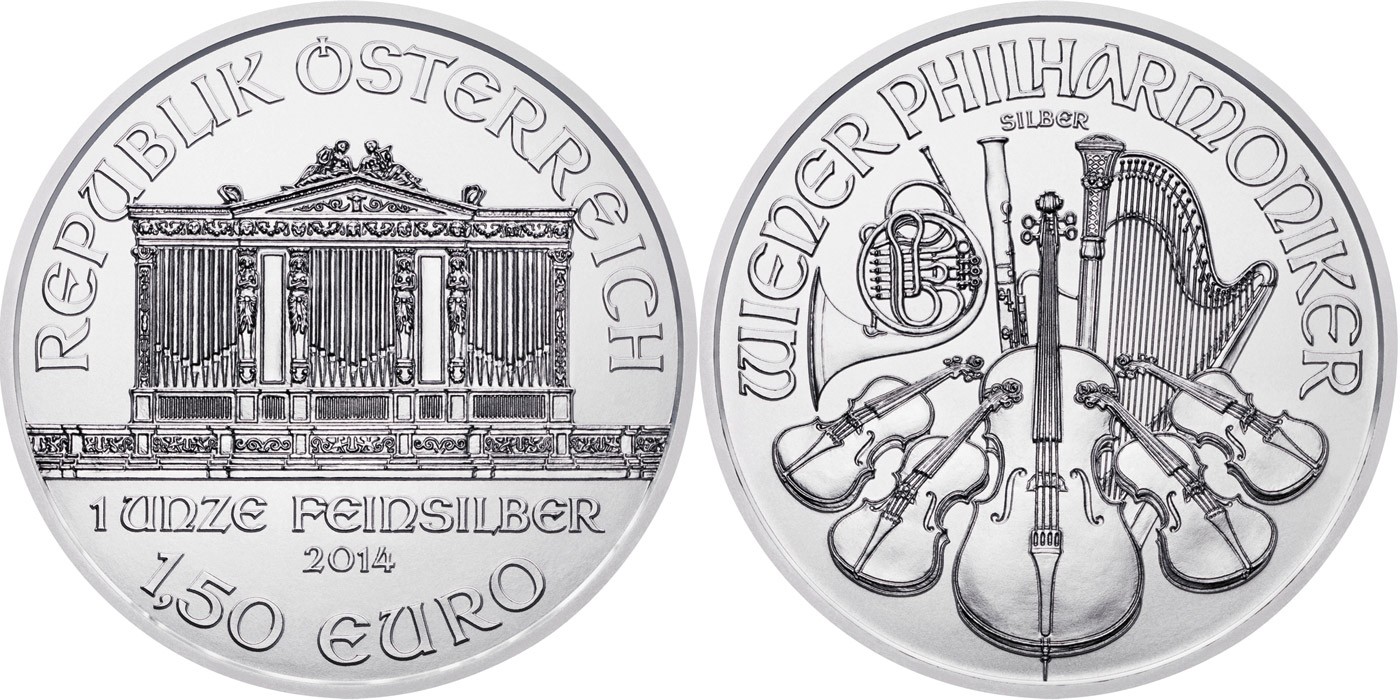 The Austrian Vienna Philharmonic coin is known amongst coin traders, or colloquially, as a Silver Phil.

Silver bullion coins are generally made from investment grade silver bullion, which means that they have a minimum purity of 999. All silver coins are government backed, and have some legal tender value. Coins that are not backed by a goverment are called 'rounds' instead.

The Silver Philharmonic one ounce coins are generally purchased in “monster boxes”, which contain 500 coins. There are 25 tubes, each containing 20 coins each. The coins are priced based on a premium above the market spot silver price. Most investors tend to keep silver coins as part of a long-term investment portfolio.

SwissBullion.eu sell silver philharmonic coins for VAT-exempt storage located in Zurich, Switzerland, or for delivery. Clients who select to store their purchase may select at any time to sell the items back, or to request delivery. For further information, please do not hesitate to contact us.