A Brief History of the British Sovereign

The United Kingdom has been striking the “sovereign” gold coin since 1817. This coin has a definite amount of gold it in and has the value of one pound sterling. During the time of the British Empire, this coin was in circulation in Britain and various other parts of the world including Canada, India and Australia. Today the Sovereign is one of the most popular gold coins manufactured by the Royal Mint in England.

The Sovereign was named after the original and first of its kind “The English Gold Sovereign”, which was struck until 1603. In 1816 there was a revamp of the sovereign, which was a part of ‘the Great Re-coinage’. At first, the British Sovereign Gold coin was not very popular among the public because the currency notes used at that time were considered more convenient. However, £1 currency notes were soon limited by the government, and eventually, the sovereign took their place. It soon became popular in other parts of the world too because of a definite quantity of gold it contained.

The “George and Dragon” design:

The British Sovereign Gold coin is best known by its reverse design showing Saint George riding a horse. This popular design was made by the skilled coin designer Pistrucci. He designed various other coins in addition to this one.

The George and Dragon design show Saint George on horseback with his hand clutching the horse bridle's rein. He only has his legs and feet armored. He has a helmet on his head with his hair floating behind. He also has a sword in his right hand with the dragon laying on the ground wounded.

While many things have changed in the coin's design over the years, there is no dramatic or considerable change in its composition or shape.

Through the years, this coin has changed its role according to the value and application of gold in various eras. Let’s take a look at the certain highlighted points.

This coin was first circulated in 1817. At this time the Sovereign faced tough competition with currency notes, which were largely considered a more convenient way of trading. As a result, this coin failed to gain mainstream popularity, and there was a considerable decrease in the number of mintages the following year (1818).

The proposal lead by economist David Ricardo to ban gold as a metal for coinage caused the coin’s value to decrease further. However, his proposal was declined in 1820, and the Bank of England continued to issue gold Sovereigns as a means of payment. The coin increased in value during wartime and quickly began to replace banknotes. Watching this positive trend, British parliament banned the issuance of notes below five pounds in 1826.

The British Sovereign gold coin promoted worldwide trade activity and provided more liquidity in the market. Britain, Australia, Canada, and some other countries struck Sovereigns in the colonial era. They were in-fact promoted by several central banks to promote gold trade.

Due to the discovery of new gold deposits in Australia in 1851, the demand for a similar coin like the British Sovereign increased. The officials in Australia installed a mint in 1853 and started striking a similar Sovereign but with different design and a slightly lighter color due to a higher silver content. This coin was not a legal tender until 1866.

Canada followed Australia by establishing a mint branch called the “Royal Canadian Mint" and started making their own version of the sovereign. India also did the same.

At this time, the Sovereign was the most popular coin worldwide, and was accepted at all ports of trade under the British Empire due to its gold content. This coin helped increase and facilitate trade throughout the Empire. 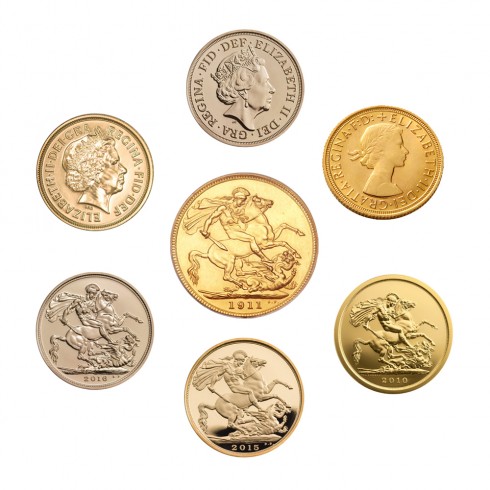 Since 1979, the sovereign has been issued mainly for the bullion market. It is also being struck by the Royal Mint exclusively for the collectors. After 2017, coin restored its original Pistrucci design of 1817. The market value of the gold Sovereign is set in line with the spot gold price. Under British Law, Sovereigns are exempt from Capital Gains, which makes them a desirable long-term investment option.